The Bottom of the Garden

My project explores the idea of body, identity and character.  At the heart of my project is the love of investigating nature and the creations that can happen at the bottom of the garden. My work comprises an A2 edited black and white photograph, character maquette and a texture board. I have portrayed a character that is a friendly gnome/fairy using features such as big eyes, pointy ears and a perky nose which project a pretty and cute personality.

I am fascinated by the magic and the unknown that surrounds the fantasy world. My work has been inspired by Stan Winston who created and directed the film A Gnome named Gnorm (1990).  I have also been influenced by Brian and Wendy Froud who created beautiful sketches and dolls for the film Labyrinth (1986) and were the originators of the character of Yoda for the Star Wars franchise (1977-present). I have taken aspects from each artist’s work and incorporated these into my final finished pieces.

My photography has been inspired by the Cottingley Fairies (1917), a mischievous and creative series of images which involved cutting out fairies from magazines and placing within a scene. I used Super-Sculpey clay for the main body of my character, Milliput for support and various sculpting tools in the creation of my maquette. My photography piece has taken elements from the Cottingley Fairies (1917) series of photographs such as the sketches of the fairies and the aged film look. I used my iPhone 12 camera and took several images and then before choosing final print. I have edited this photo in Photoshop, incorporating sketches of my character to create my own version.

Overall, my work is fun, light-hearted but mysterious. I hope you enjoy viewing my work as much as I have loved creating it. 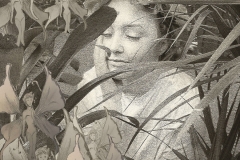 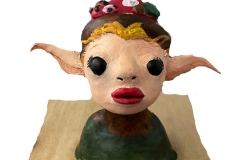