Let Me Be is a mixed media work including acrylic paintings and an illustration zine, which is divided into two parts.
The two elements combined form one narrative. A 360 degree story. 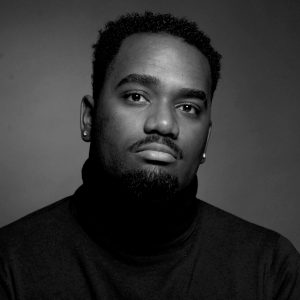 To me, Art is something formed, created freely, expressive, transformed, and presented in various ways, mixing several elements and materials and even making a crossover with various types of art.

I believe, Art is the expression of emotions, ideas and notions that we have about the world and the actuality, being able to share with others our perception and our vision of what surrounds us.

Experimentation is something I have been exploring a lot, being able to create something that is not reproduced from reality, creating something new, mixing elements.
I explored this notion on my project; mixing painting with illustration; mixing Abstract with Realism. Adding textures through materials and colours.

With painting and illustration, I can be completely free, creating what I want and having control over what can be produced, being able to use as many materials that I need and elements, and even being able to mix and work on something for both fields.

Let Me Be is a crossing between genders, between two different dualities, where a man and a woman from different natures, physically not touching each other, but changing their emotions, shape and state. The man from water and woman from fire, are both surprised by what is beautiful from their opposite side, start walking to the other side and changing places, and transforming into something that differs from their reality.

I formed a narrative between two beings of different elements, capturing the moment they jump from their canvas start moving, in the zine, to the other canvas, noticing the differences of movement, expressions and poses, they begin to metamorphose and gain characteristics from the opposite element, swapping their movements and their poses, finally splitting into three on the canvas, representing the body, identity and character.

The concept of duality is, in part, represented by my use of methods, techniques from two separate fields (Fine Arts and applied arts), usage of colours, processes and themes.

Creating a contrast and a parallel between what is different, between the abstract and realism, between the naked body of a man and a woman, the movement and poses on both sides, exploring different feelings and emotions through the abstract. 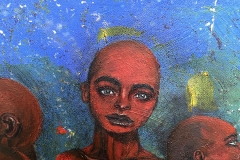 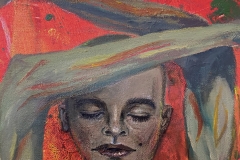 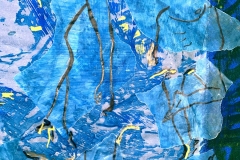 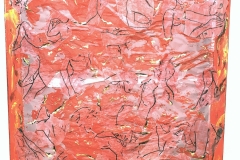 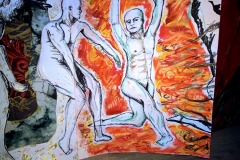 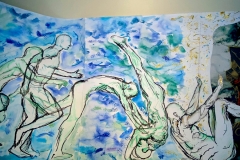 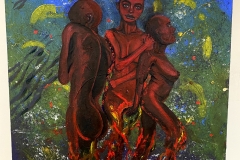 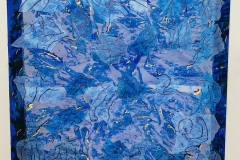 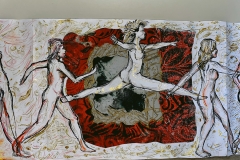 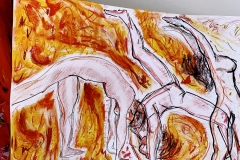 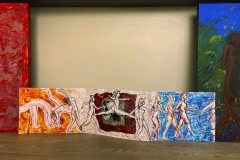 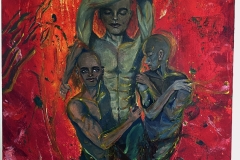 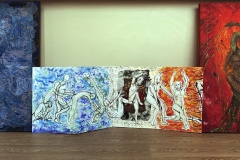