Growing up I have always had an interest in vampires and other mythological creatures.  I wanted to investigate how stereotypical vampires are portrayed on TV and film and explore whether their image influences their behaviour.  My final work is a sculptured head, in clay, of a demonic vampire that portrays its visually vicious and villainous characteristics.  I have also created a series of monoprints to convey the character’s emotions and desires.

I was inspired by the demonic characters from the television horror series Teen Wolf (2013) and Bram Stoker’s Dracula (1992) as main sources of inspiration. I researched special make-up effects artists such as Greg Cannom, who worked on Dracula (1992) as well as The Mask (1994) and The Lost Boys (1987).

I sculpted the vampire using Super Sculpey clay which is soft, pliable and slow-drying to achieve the effect of the character being recently wounded and also with previous scarring.  I wanted to present the vampire as a creature who often had to fight for his survival; finding his prey and warding off enemies.

I investigated older, traditional techniques for creating a series of prints to be displayed with the sculpture.  Mono printing was used heavily in the newspaper industry and historically in the distribution of propaganda.  Certain companies held power over what information was shared with the public and it is this sense of power and control that I imagine my character wanting to hold over people.  My prints are heavily influenced by printmakers such as Julia Humfress and H. N. Werkman; both of whom create abstract letterpress prints and helped me to shape my idea of creating an abstract, anagram letterpress print, using words to show my vampire’s ambitions and emotions. 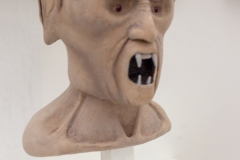 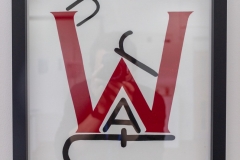 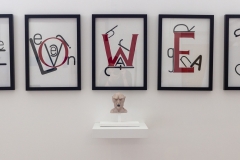 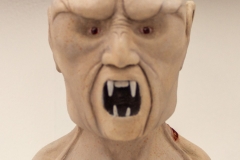 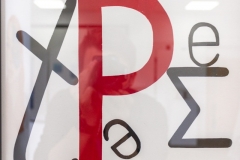