My project is based on the theme of identity and body. I have combined photography and special effects to create a reptilian sea creature and explored the differing looks based around this idea. My exhibition comprises a sculpture, texture board, sketches and a large format photograph. The photograph aims to illustrate the transformation of myself from a simplistic aesthetic to my chosen character.  As an artist I believe in creating the highest quality creative final products.

I have found inspiration with transformation through metamorphosis and how creatures in the natural world, such as caterpillars, transform and change from one form into an entirely new organism through the process of transformation. I have been influenced by the work of Annie Leibovitz and her series of digital composites for Disney. Nick Knight whose studio work involving coloured gels creates a rainbow of colours and takes models out of the natural world also influenced my work. Neil Gorton, who worked on the Dr Who series (1963-2021), has inspired my Special Effects work.

My project investigates how we can change our appearance simply yet effectively. Using a variety of both traditional and digital techniques my images aim to create a fantasy world. The photographs have been created in the studio and lit using coloured gels. The final images have been edited in Photoshop to enhance the overall underwater feel. The skin has been smoothed and the colours enhanced.

My sculpture was made using soft sculpting clay, which is easy to shape; tin foil for the base and the eyes and teeth have been created using Milliput. The texture board has been created using NSP clay and shows the skin texture and finer details of my character. 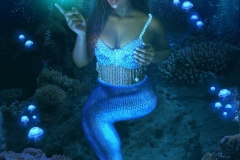 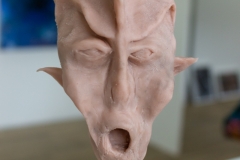 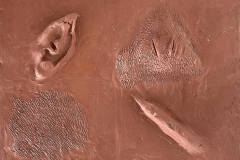 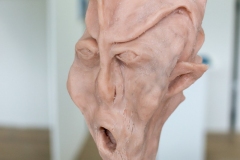