I wanted to display the process of metamorphosis in my work. I chose to create a lizard-like creature as I liked the stark contrast between human and lizard.  I wanted to convey the concept of transformation and to invite the viewer to imagine my work in a film or television setting.  I developed the project through Fine Art and Special Effects as I am keen to experiment with different media, processes and techniques.

My work comprises a character sculpture of a humanoid lizard creature featuring a furrowed brow and textured skin.  It also includes a painting using acrylic paint, which is a portrait of myself, with a portion of my face in lizard form. I used basic skin tones and then added a mixture of blues and greys to create a deep shadowed effect. I enhanced the character with yellow markings to make the Marquette unique.

The main influences behind my work have been Barrie Gower who worked on the set of Game of Thrones (2011) as the SFX make-up artist, and Rob Bottin who created the makeup on The Thing (1982), which resonates with my practice as some of the creatures are morphed together reflecting my initial concept and the final pieces.

I used wet blending to give myself a base colour, and small brush strokes for the finer details of my painting. I used NSP clay to create the body of my sculpture and milliput for the teeth and eyes. I used an armature to display my work on which I used MDF and wire to create a stable structure. 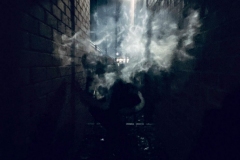 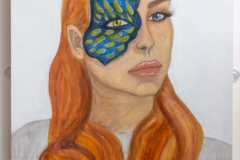 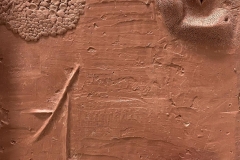 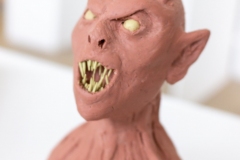